Pink Think: “We also own a little boat and I’m like a kid with it. I take off early in the morning, fishing rod in tow, and just drift about the ocean all day.” – Perry Como

[This is Part 5 of a 7-part series on tent-camping at Lake Powell. Here is my intro post on scorpions as well as posts on sabotaged gourmet meals, getting my hair wet , pin-ups & pizza and odd fish.]

I knew, going into our marriage, that boating would play a big part in our lives. While he was growing up, Drew’s family owned a boat. Most of his anecdotes from growing up have to do with his adventures while out boating with his family. His dad is a boat salesman.

For 15 years, I resisted the idea of getting a boat because:
1. It is expensive.
2. I don’t want to spend every weekend at some lake.
3. I have to drive/tow it some time.

For the last several years, we have borrowed a boat from Drew’s dad’s work. It worked pretty well, except when we wanted it and it was not available, and we could never store our stuff in it, long-term.

I drove the boat today towing Drew behind on a tube. Last time I did this, I jack-knifed so bad that I broke the rope and left Drew stranded in the middle of the lake. Today, I am doing good. I see the two boats up ahead and I swerve, managing to not crash into either one of them. When he was done, Drew said, sounding surprised, “That was good, especially when you drove near the two boats and their wake.”

Um, right. That was on purpose.

Last year, much to Drew’s delight, I agreed to us buying a 22-foot Hydroswift boat. 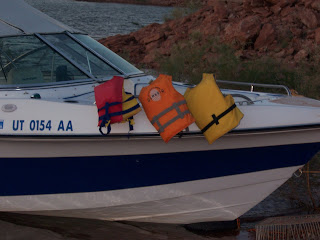 Why did I say yes?

It came down to the kids. They were born with life-jackets on. Starting when they were babies, we took them to Lake Powell on our annual trip, where they nursed and got heat-stroke… and had the time of their life.

And memories as a family. Our best memories come from these trips: like the time my mother in law had a rattlesnake slither in her flip flops, when Sabrina spotted a rattlesnake and scorpion at camp, when we huddled in our tent during a storm to eat Vienna sausage from a can. Or the year when mice scurried everywhere in my in-laws’ motor home, when Sabrina water-skiied while hanging on to Drew’s arms, when Sierra learned how to knee-board.

Drew has exercised restraint. He could force us to go boating every weekend like his family did while he was growing up, but he doesn’t. It’s a good amount for me, going on the few big holiday weekends of the year. The occasional day trip.

It’s expensive, sure. And we might not be able to afford big trips to Disneyland for a long time. But the memories are priceless.

Next: A Life-Jacket Kind of Storm