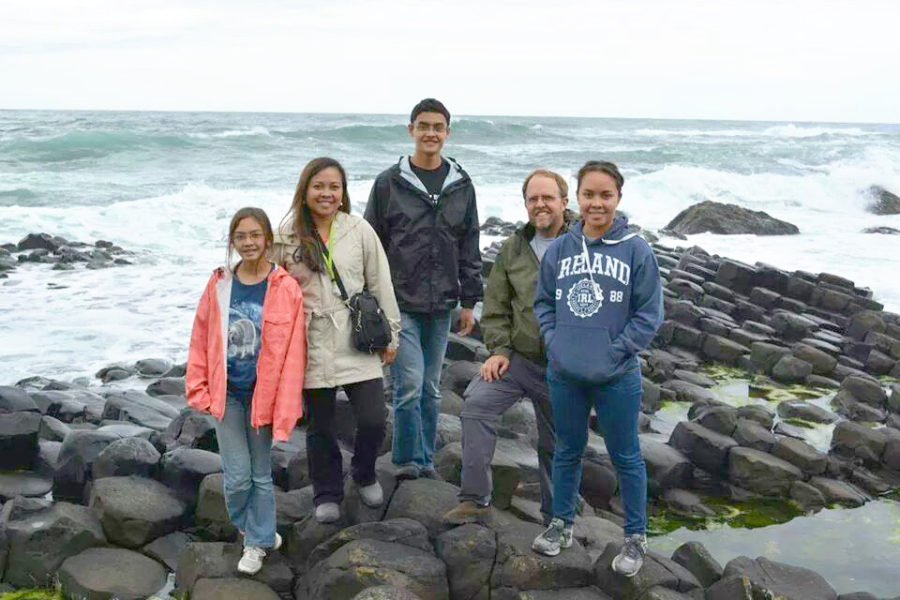 My family at Giants Causeway in Northern Ireland in 2014

After writing about Italy in Her Billionaire Spy, my thoughts turned to… Ireland. My sister married an Irishman and our family traveled there in 2014 over the Fourth of July, so Ireland is special to me. Our three then-teen children declared, emphatically, that it was the most beautiful place they have ever been to. I agree.

But how to mesh it with a billionaire storyline? While we were visiting, I didn’t get the impression Irish billionaires lurked at every corner. So I turned to Google. It turns out the country has produced two billionaire brothers recently, 29 and 27 respectively, for their payment processing company. The younger one is the youngest self-made billionaire in the world.

Perfection.  So around this true story, I weaved Her Billionaire Valentine, a romance about an American woman who surprises her Irish pen-pal with a visit. It was supposed to be a secret identity romance, where he keeps his billionaire status a secret…

…but the brother character I created was unruly! Aiden wanted to pick her up at the airport and out her as a gold-digger. Which of course she’s not. And which causes mayhem because he ends up falling for her! Now she has to choose between the brothers.

So after a few false starts, I had Aiden have his way. Amidst sightseeing in beautiful Ireland, games of Gaelic football, and a stay in a castle based on Muckross, Killarney, the couple fight their attraction to each other. Thank goodness for the legendary Fairy Tree at the Hill of Tara, where wishes can be hung.

After six days of sprinting in a white heat, I finished Her Billionaire Valentine at dawn today. Woo-hoo! Over New Year’s Day and having family over. It was a little rough balancing that all, but I’m excited to finally turn it over to my editor. I also am having an Irish friend read it to make sure that I have the Irish brogue and setting right.
So…what’s next? I have so many possibilities—a non-fiction writing book, a second cowboy romance (Tammy & Jeremy!), my billionaire romance set in Spain and slated for March (a modern day Beauty & the Beast retelling), a futuristic billionaire romance, or a boxed set of my first three billionaire books. Which one should I tackle first? Or maybe I can take a nap. A long, long nap.

Get Her Billionaire Valentine here.