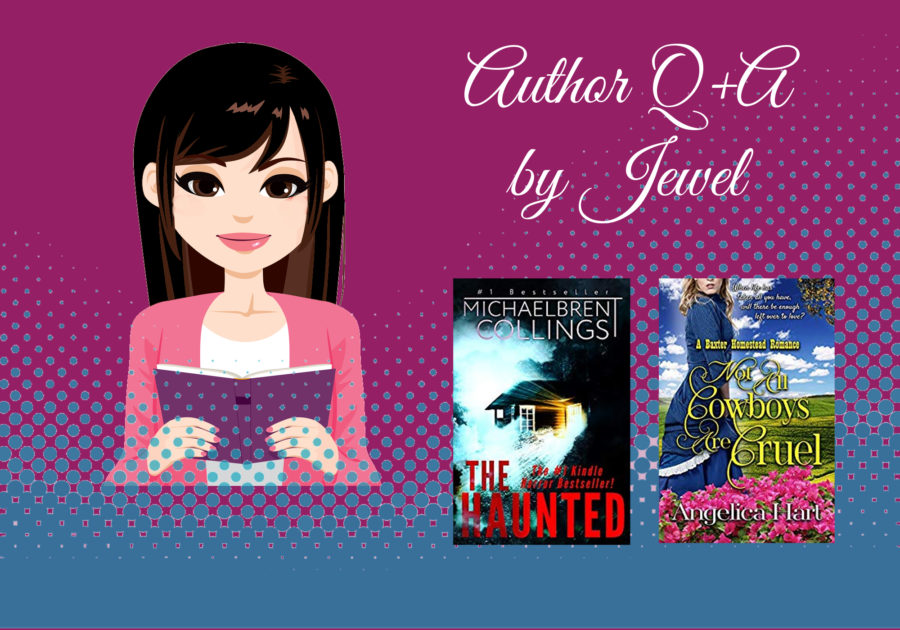 Michaelbrent Collings is an internationally-bestselling author, multiple Bram Stoker Award Finalist, and one of the top indie horror writers in the US. He hopes someday to develop superpowers, and maybe get a cool robot arm. Find him at his website, or follow him on Twitter or on Facebook at his fanpage. He also publishes historical Western Romance under the pen name Angelica Hart. This is Part 1 of a two-part Q & A.

Q. Okay… I have a confession to make…

A. Ooooh… time to sling dirt.

Q. I had to wrench myself away from your (pen name) Angelica Hart’s book 1 (Not all Cowboys are Cruel) to make this chat.

A. Hahaha! Well that’s the kind of confession authors like to hear.

Q. I am fangirling Angelica Hart.

A. Rad. She is swooning. Does make me happy to hear, in all seriousness.

A. I get a lot of side-eye from people given the fantastically schizophrenic nature of my genre choices. So it’s nice to hear I’m getting ’em right. ;o)

Q. I looked you up a bit…and I read the Deseret News article from 2014. The one with your dad. Do you remember that?

A. Oooh… I’m internet famous! Yup I do. They did a couple articles on me, and they were all fun.

Q. I vaguely remembered you were the son of an author too. And it was an a-ha moment. Like it was key to who you are now. Is it?

A. Yes. Very much so. First of all, Dad was my first and best writing teacher. He was the Creative Writing Director of a major university for decades, so I grew up with writing as a fact of life. Genetically doomed. Doomed! DOOOOOOMED!

Q. LOL. Wow. That would have been so amazing to have a dad like that. Did you fight against writing… at first?

A. No. It wasn’t a “thing” – it really was just the way things were. All my siblings and I would read constantly; I remember LOTS of times where we fought because there were only cereal boxes at the table and we’d argue over who got to read them. And it was tremendously freeing to realize that I, as a small, smart, nerdy, weak kid could beat people up who were mean to me, if only in fiction. Writing was a natural extension of that. So all of us write, though I’m the only one who does it as a profession.

Q. Makes sense. You said he was your first teacher. How so?

A. I wrote my first short story at four (yes, four – I read and wrote very early). Literally red Crayola, and it went approximately, “There was a parot and he flu away and excapd.” Dad read it and, to his great credit, didn’t just nod and pat my head. He told me that it had a lot of great stuff (“A parrot! Wow!”), then started teaching me about what it meant to have a story. Beginning, middle, end. Things happening that mattered, with story reasons WHY they mattered.

Not all at once, of course… but he read – and still does read – pretty much everything I did, and gave his thoughts. Always graceful and kind… but honest.

Q. Okay…. fast forward a bit. Did you know that you were going into writing as a career? You went into law, right?

A. Hmmm… that’s complicated. I WANTED to be a writer. Actually, I thought I wanted to be an actor at first, but realized I have a face made for typing. With my face… so writing was the fallback. Only I didn’t want to be a starving artist, forty years old living in my mom’s basement and trying desperately to convince some woman to go out with me because “I’m gonna make it big any day, baby!”

A. So I went to law school and became a lawyer.

A. The last refuge of the wishy-washy. I’m still buying my soul back on an installment plan.

Q. Well, after about seven years, I’d made partner and all that good stuff, and the managing partner of the firm invited me in for a “talk.” That was the end of that. Turned out they didn’t much like the fact that I’d been writing on the side – who knew that writers are LESS esteemed than lawyers?

I joke a bit – that DID happen, but there were other factors, too (my wife had had severe health issues and I’d been working basically part-time at the firm for the last year). But they did mention the writing thing. Kinda cracked me up in a horrible sort of way.

A. Meh. Not committed, just wanting to do right by my family. That’s always been my top priority. So I knew I liked writing, and by that point of my life I knew I couldn’t NOT write, so I’d work at the firm from early morning to early evening, come home and play with the wife (and kids as they came), then write after they went to bed. So 10 pm to 1 or 2 am every night, for nearly a decade. The job at the firm ended (luckily!) just after I sold my first screenplay and had my first big hit on Amazon.

Q. Was that a momentous jump, to put in that much work into that career direction?

A. The writing thing? It wasn’t really a momentum jump or a choice. I HAD to write. The best definition of a “real” writer I’ve ever heard: someone for whom the only thing worse than writing is NOT writing.

Q. You saw what it was like growing up… and it didn’t faze you. As in, your dad was a teacher, is that why? As opposed to say, a straight-up novelist.

A. Well, my dad was primarily an academic writer, and had a good “real” job that had, you know, health insurance and a 401K. So my idea of what a fiction writer is had as much to do with reality as most people’s. Not much at all.

Q. So that big break…a screenplay, did you say?

A. In 2011/2012, the book (RUN) came first, actually. I knew I loved telling stories. I knew I had to. I tried to get published for years. I LITERALLY SENT MY FIRST BOOK TO EVERY PUBLISHER AND AGENT IN THE US AND CANADA WHO DID THAT KIND OF BOOK.

I have two 4″ binders full of single-page rejections. So I let it sit around, and someone mentioned this “Kindle” thing. I put the book on Amazon, thinking it couldn’t hurt anyone, and six months later it was the #1 Bestseller in Scifi, Horror, and the #2 in Thriller and in the Top 100 Overall Bestsellers.

And that did me a disservice, because I thought I knew what I was doing.

Q. The title gives me shivers.

A. The tagline is cool: “What do you do when everyone you know – friends, family, everyone – is trying to kill you. Answer: you RUN.” So I had this pretty decent hit, and I sold a screenplay shortly thereafter, which meant that we had enough money not to starve for a while after I stopped being a lawyer.

Q. Whoa. I just googled the cover. What IS that thing? (I will have to read it)

A. Hahaha… it’s a fun book, and I cringe whenever someone mentions reading it because it’s an early work. I wrote it in my twenties, so naturally (I hope) I’m doing better stuff now. It’s like having someone see your high school yearbook. “No, no, that’s not what I look like! I SWEAR!”

Q. Sure… but what do you think made it a hit?

A. I have NO FRICKING IDEA. That’s what I mean by having a success did me a disservice. I had a nice little hit, then nothing for years because I didn’t know WHAT I had done, and so had no way to replicate it. <Cue starving artist years>

Q. Did you eventually replicate something? As in, consciously understand what made your books work and did it deliberately? Which book was that?

A. Well, I was writing like a maniac, and turning out books like crazy, but for years there would be just enough to get along, barely. Then there’d be a blip and we’d have a bit more, then back to “barely making it.”

As far as which one marked the beginning of “Oh, THIS is how you do it…” Geez. Probably THE LOON or APPARITION. Both are horror, both got really good reviews and both were about the time that I started going to conventions and the like and interacting with other authors and really listening to how THEY did it.

A. 2014. I still struggle with that, though. I am an indie in a primarily e-book market, which means by the time I figure out how something works, three new things have come into being that I have to deal with.

A.Oh, just any three. Just saying that the industry moves so fast it’s never “Oh, NOW I get it.” Rather, it’s “Okay, I figured out THAT cutting edge thing… and now it’s got another two weeks before the NEW cutting edge thing happens and renders my knowledge obsolete.”

The e-books all have metadata to figure out how to work with, the audience demographics are their own thing, then there’s interaction on social media, email lists, best advertising practices on Amazon and Facebook and whatnot, the way covers are constantly changing so I have to update mine constantly… it never stops, and it’s cumulative. So you can’t FORGET stuff, you just have to constantly integrate NEW stuff. And, somehow, find time to write as well.

It’s fun, because I’m constantly learning. But frustrating, because there’s always so much more TO learn. But at the same time, I get to be… Coder, Webmaster, Cover designer, Marketing/PR Guy, and on and on as well as the writing stuff.

Q. Yup, I see that. You were merrily going along your career, and then in 2017 you decided to write historical western romance.

A. Sure, why not? I already wrote horror, thriller, scifi, fantasy, YA, MG, and mystery. Not like I could confuse Amazon’s sales algorithms more than I already have. It was also a time where there was a lot of rough stuff going on in life. Nothing I’ll bore you with, but I had told my fans I was stepping away from writing.

A. A few people I really respect emailed and said, “No, you’re not!” And they both suggested I change things up. So… Western Romance.

To be continued. Read Part 2 here.